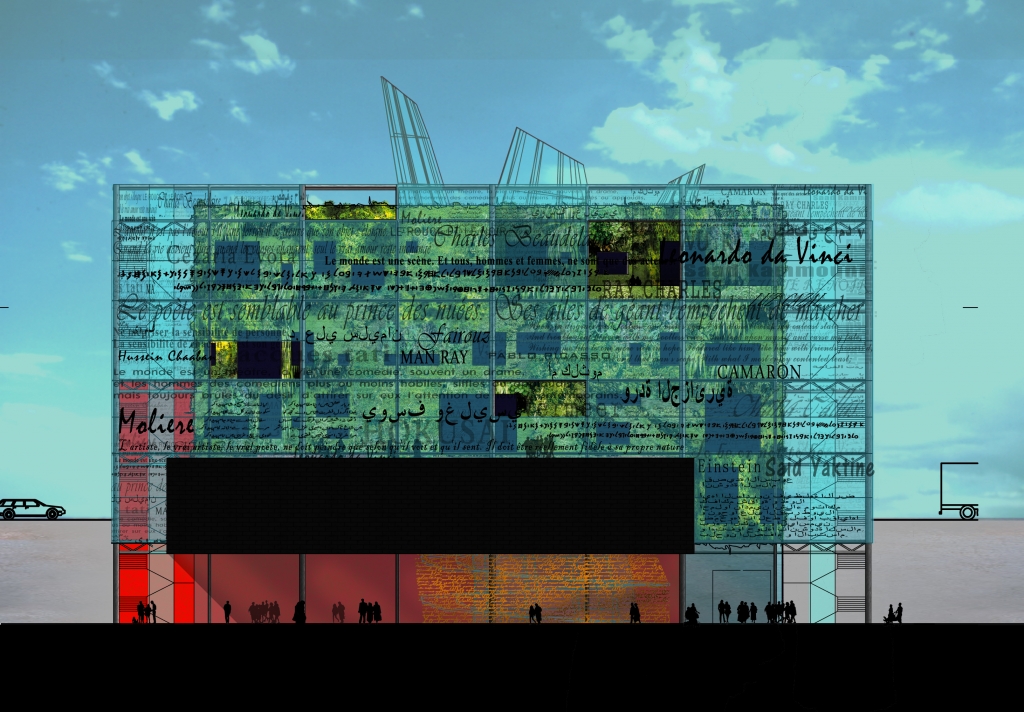 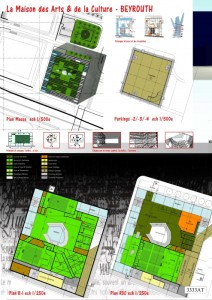 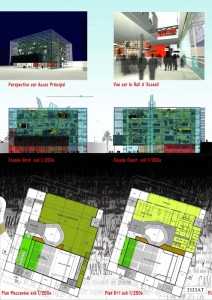 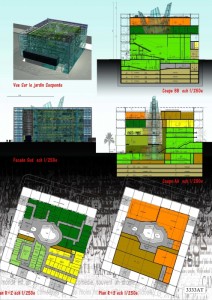 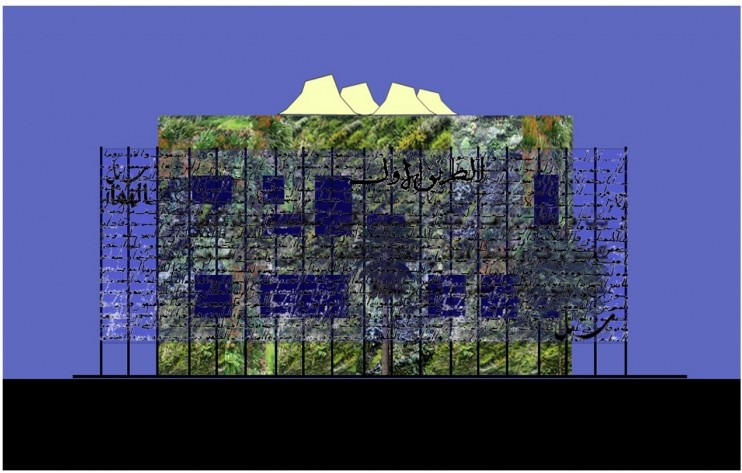 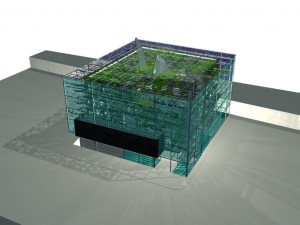 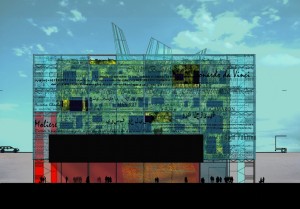 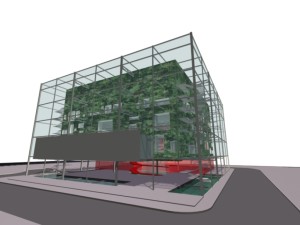 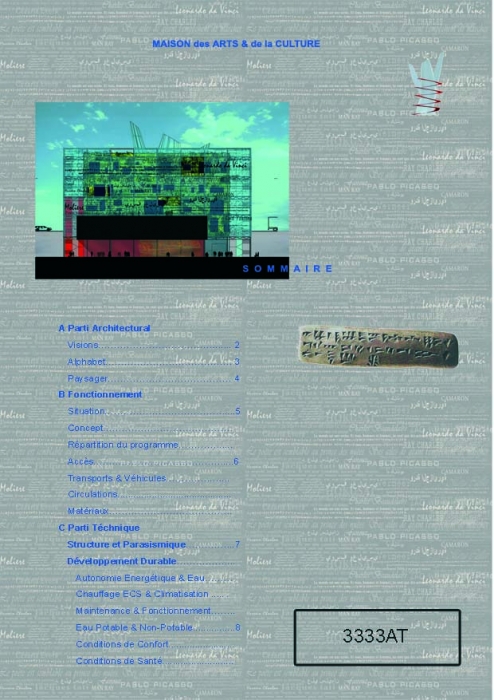 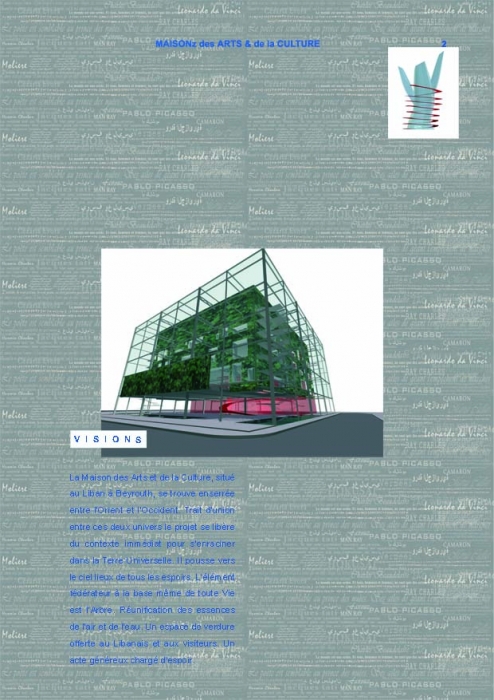 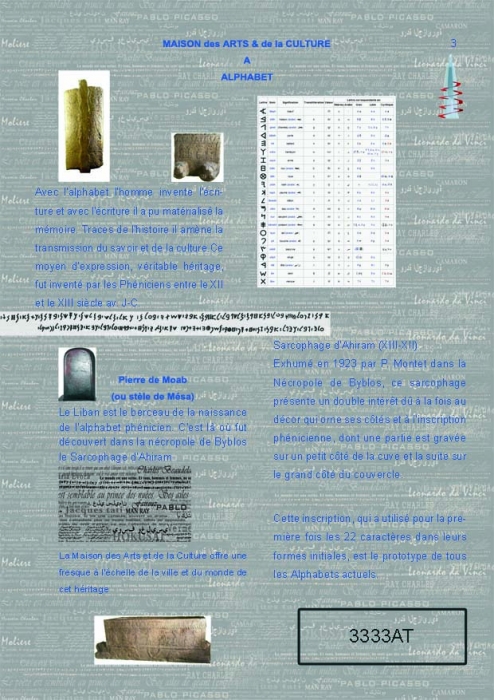 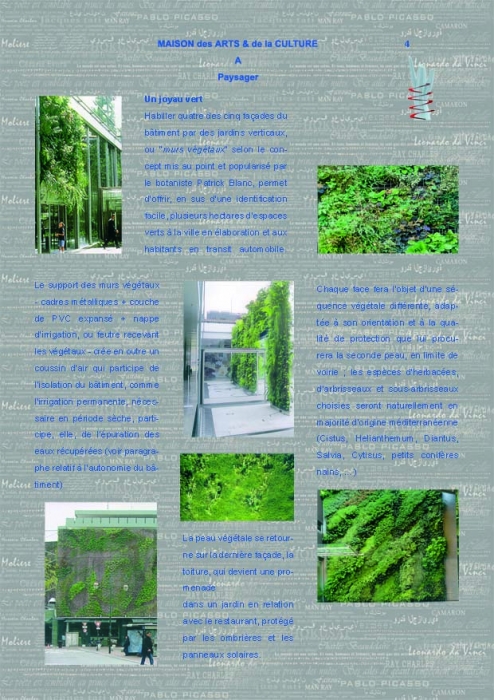 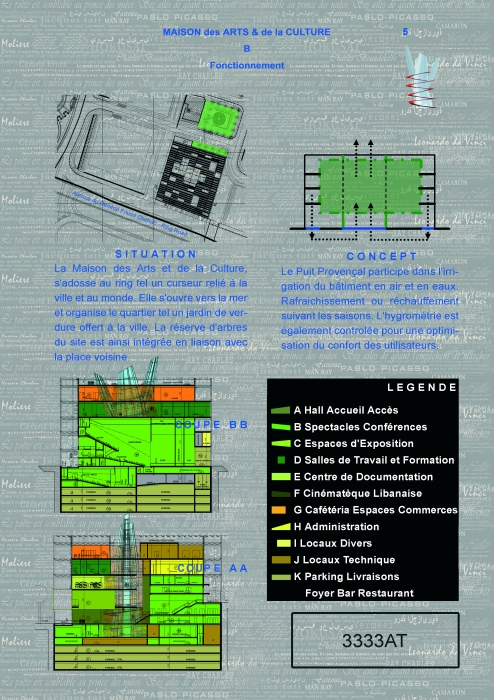 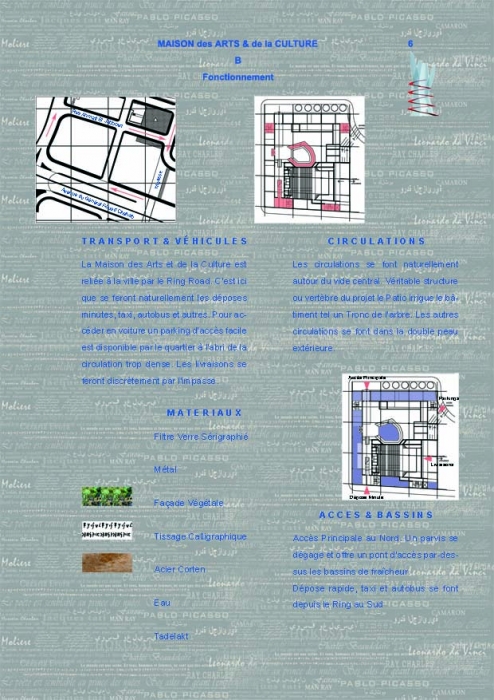 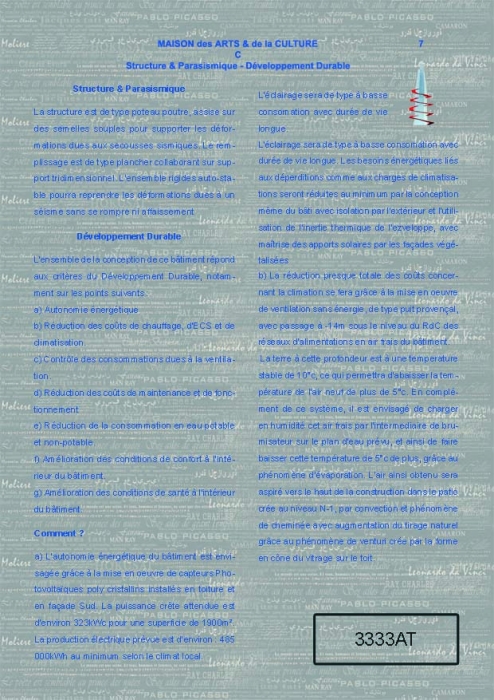 Visions
The House of Arts and Culture, located in Lebanon in Beirut, is sandwiched between East and West. Hyphenation between these two universes the project is released from the immediate context to be rooted in the Universal Earth. He pushes heavenward places of all hopes. The unifying element at the very foundation of all Life is the Tree. Reunification of the essences of air and water. A green space offered to Lebanese and visitors. A generous act filled with hope.

With the alphabet man invented writing and with writing he could materialize memory. Traces of the history brings the transmission of knowledge and culture. This means of expression, a true heritage, was invented by the Phoenicians between the XIIth and XIIIth centuries B.C.
Moab stone (or stele of Mesa)
Lebanon is the cradle of the birth of the Phoenician alphabet. This is where the Sarcophagus of Ahiram was discovered in Byblos necropolis.
The House of Arts and Culture offers a fresco on the scale of the city and the world of this heritage
Sarcophagus of Ahiram (XIII-XII)
Exhumed in 1923 by P. Montet in the Necropolis of Byblos, this sarcophagus has a double interest due to both the decor that adorns its sides and the Phoenician inscription, part of which is engraved on a small side of the tank and the continuity on the long side of the lid.

This inscription, which used for the first time the 22 characters in their initial forms, is the prototype of all current Alphabets.

Landscape
A green jewel
Dressing four of the five façades of the building with vertical gardens, or "plant walls" according to the concept developed and popularized by the botanist Patrick Blanc, provides, in addition to easy identification, several hectares of green space to the city under development and to the inhabitants in transit auto mobile.
The support of the plant walls - metal frames + expanded PVC layer + irrigation bed, or felt receiving the plants - creates an air cushion which participates in the insulation of the building, such as permanent irrigation, necessary in dry period, participates in the purification of reclaimed water (see paragraph on the autonomy of the building)
Each face will be the subject of a different plant sequence, adapted to its orientation and the quality of protection that the second skin will provide to it, on the roadside; the species of herbs, shrubs and sub-shrubs chosen will naturally be mostly of Mediterranean origin (Cistus, Helianthemum, Diantus, Salvia, Cytisus, small dwarf conifers...)
The plant skin turns on the last façade, the roof, which becomes a walk in a garden related to the restaurant, protected by the shades and solar panels.

Functions
S I T U A T I O N
The House of Arts and Culture, leans against the ring as a cursor connected to the city. It opens towards the sea and organizes the district like a garden of greenery offered to the city. The tree reserve of the site is thus integrated in connection with the neighboring square
C O N C E P T
The House of Arts and Culture, located in Lebanon in Beirut, is sandwiched between East and West. Link between these two worlds the project is released from the immediate context to take root in the Earth and offers a haven of peace

The House of Arts and Culture is connected to the city by the Ring Road. It is here that the minute drops, taxi buses and others will be done naturally. To stay in the car a parking of easy access is available by the district sheltered from the traffic too dense. Deliveries will be done discreetly by the impasse.
T R A F F I C
The circulations are naturally around the central vacuum. True structure or vertebra of the project the Patio irrigates the building like the trunk of a tree. Other circulations are in the outer skin.
A C C E S S and P O N D S
Accès Principale au Nord. Un parvis se dégage et offre un pont d'accès par-dessus les bassins de fraîcheur.
Dépose et Taxi se font depuis le Ring au Sud

The structure is of steel and concrete beam (encasement) type which combines the advantages of these two materials to adapt the structure to all types of soil and make it highly ductile. This frame will also rest on the principle of strong pole, weak beam, recommended in seismic zone. Intelligent distribution of the building masses and the use of earthquake-resistant joints at critical areas will avoid any twisting phenomenon and provide a consistent behavior to the structure.
The bracing will be in the horizontal direction by the rigid diaphragm formed by the collaborative floor on three-dimensional support and in the vertical direction by the planted skin rigid and braced by cables.
The non-structural elements will be fixed independently on the superstructure and vice versa.
The type of foundation will be adapted according to the nature of the soil encountered on site to best meet the constraints and telluric solicitations

Sustainable Development
The overall design of this building meets the criteria of the Sustainable Development, in particular on the following points:
a) The energy autonomy of the building is envisaged thanks to the implementation of polycrystalline Photovoltaic sensors installed on the roof and on the south façade. The expected peak power is about 522kWc for an area of 3660m².
The expected electricity production is approximately 800 000 kWh according to the local climate
The lighting will be of low consumption type with long life.
The energy requirements related to losses as well as air conditioning loads will be reduced to a minimum by the design of the building itself with insulation from the outside and the use of the thermal inertia of the envelope, with control of the solar gains by the green façades

b) The almost total reduction of the costs concerning the air conditioning will be done thanks to the implementation of ventilation without energy, of type "puit provençal" or "puit canadiens" (heating and ventilation system that consists of underground pipes), with passage to -14m under the level of the RdC of the networks of supplies of fresh air of the building.
The earth at this depth is at a stable temperature of 10 ° C, which will lower the temperature of the fresh air by more than 5 ° C. In addition to this system, it is planned to charge this fresh air with moisture by means of misting on the water body level, and thus to lower this temperature by 5 ° c more, thanks to the evaporation phenomenon. . The air thus obtained will be sucked up from the building in the patio created at the R-1 level, by convection and chimney phenomenon with increased natural draft thanks to the phenomenon of venturi created by the cone shape of the glazing on the roof .
This patio will be the real tree that will irrigate the entire building from the inside.
This air will be collected at all levels, and will allow air conditioning by mixing boxes the renewal of air and heating as the refreshing necessary for the proper functioning of the various offices, rooms, exhibition and auditoriums planned. Heating and cooling will be aeraulic type with low air speeds, not annoying for users via cold beams. In addition, it is planned to draw or reject calories on the nearby groundwater table, by means of a geothermal water-water heat pump (240kW), in order to ensure the production of DHW necessary for the needs, as well as than the extra heating during the winter period. The stable temperature of the groundwater table makes it possible to expect an energy performance coefficient (COP) of 4.5 with limited power.

c) The maintenance and operating costs will therefore be very limited, being limited to the good controls of heat production, DHW, lighting and glazed surfaces. It is planned the control of the quality of the ECS to avoid any problem of scaling, corrosion or legionellosis.
d) The improvement of the comfort conditions inside the building will be by the production of negative ions from the water fountain provided at the R-1 level. Thanks to the phenomenon of runoff and oxygenation of the air on the misting, the quality of the outside air of the renewal of air, will be improved. The patio will be the real tree of life of the building.
e) Improved health conditions will be through :
- The implementation of a specific vegetation that is envisaged inside buildings to combat and limit the proliferation of electromagnetic waves, VOCs or aldehyde forms harmful to health that are traditionally found in wall coverings, floors and ceilings as well as acoustic insulation.
- The implementation of a Vegetation on all façades and roofing, in addition to its role of sunscreen, will maintain in summer a appropriate air quality, thanks to the natural evaporation of plants, moisture beneficial near the façades, and perhaps even bring pleasant smells around this building for users thanks to some fragrant plants such as lavender. 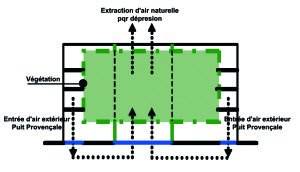 Conclusion: All of these solutions should result in an additional cost of about 20 to 25% for investment. The interest lies in a very low cost of operation and maintenance: the economy of 90% in energy, that is 1 670 MWh saved and a ratio of: 34 kWh / m² / year, and 60% in maintenance. The last point, and not least, will be the autonomy in electricity and energy of this building, thanks to the photovoltaic equipment.

The House of Arts and Culture
Libano - Omani Centre

Luca Ruspantini architect, founder and manager of a3 atelier

This site uses Akismet to reduce spam. Learn how your comment data is processed.